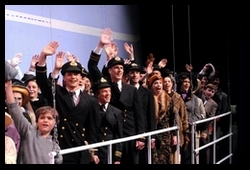 I went to the theater with a friend recently. She had never been in a jeep, so I arrived topless and doorless to pick her up. In my showing-off mood, we had a warm hint of summer evening ride to the theater.  Always fun for the first timers to watch them fight with the “airflow to the hairflow”. This topless newcomer brought a scarf. Another failed attempt.

Settling in our seats, lights dimmed, show starts, eyelids start to flutter and unfortunately I slept through most of the first half of the performance. Embarrassing as we were five rows from the front. Just close enough to be an insult to the actors.

The show was the Titanic the Musical – well someone had to go see it ( a little part of me kept hoping that they all survived this time) The show was surprisingly good, it was just me that was bad. At intermission, my friend said that she didn’t mind missing the second half of the show. I am not sure what is worse for an actor, a sleeping audience member or two empty seats right in front of them for the second half? I have never left a show before, but my friend made a good observation that I was tired and it was time to go home.

Out the door and in front of us was that sky all topless drivers dread. Dark grey, fat cotton ball clouds accented with occasional mesmerizing lightning bolt. A distance to the right. No time for getting top on. Just enough time to get home dry…I figured. Jack, come save me now! Jeep topless, doorless. Time to ride.

While my passenger is fighting with her scarf again (only Audrey Hepburn mastered this topless driving technique, I am afraid to tell her) we make plans to drop her off at Starbucks, get her husband to pick her up and I will barrel it home to the garage.

As we drive down the road, I start to wonder “what would Jack do?” and I realize that it’s just rain and not an iceberg. As the Captain of this excursion I need to save my passenger the only way I know how. I have my trusty jeep who can fly in the wind at the best of times. Full speed ahead, I take the right exit for her place which is also in the direction of the imminent rain descending. No time for coffee with the husband, just drive!

A few minutes on the highway the charcoal skies let loose with their dollops of raindrops. To my amazement, we are not getting wet! Totally cool experience. Driving fast enough that the rain just passes us by – but not for long.  As I slow down for the next turn, into the jeep comes the rain. My soggy friend gives up the scarf, I can feel her anxiety, but continue on with raindrops falling on my nose (you thought I was going to say “head” didn’t you) I pull up in her drive. I see at last, she is glad I have no doors as she jumps for the safety of her house. One man overboard and I pull away and drive like grease lightning home. On my own, it is a complete rush to the senses. My windshield wipers are wiping, but I need a second pair for the inside of the glass too. I hear of storm chasers and the rush they get chasing a storm. I feel I experienced the same rush, just driving in the opposite direction. The one song, I could not get out of my head while driving was “Grease Lightning”. I just sang it out loud with a slight twist as “Go Jeep Lightning Go”. I think Jack would have been proud.

Youtube is the most amazing place. I like to add video’s to my blogs and look what I found. Simply amazing.

Have you had a topless driving weather event?

2 thoughts on “The Titanic Jeep”

Thanks to Alex for being my model

All the glitters IS gold 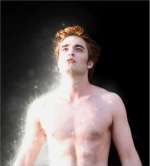 Twitter Racing Fridays - Join us. May 18th Winner @ziggy6897 with his Taxi from the 5th Element